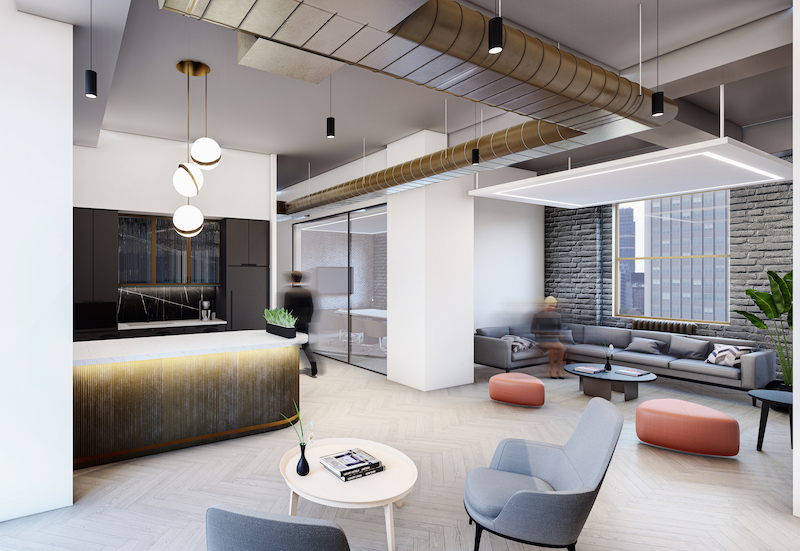 Newmark has revealed a collection of architectural renderings that illustrate the next phase of upgrades to The Paramount Building at 1501 Broadway in Times Square. Planned in collaboration with Rosemark Management, Levin Management, and interior architects MKDA, the upgrades include Class A office suites ranging in size from 1,000 square feet up to 45,000 square feet, new corridors, and sweeping views of the New York City skyline.

“This property has been under family ownership for over 50 years and we continue to meaningfully reinvest in the building to maintain its standing as an integral part of the New York City fabric,” said Charlie Rosenberg of Rosemark Management.

Built in 1926 by Paramount Pictures as its East Coast headquarters, the 32-story tower was designated a New York City landmark in 1988. Beginning in 2018, ownership kicked off a $50 million capital improvement project with enhancements including a new lobby that was relocated from Broadway to 43rd Street, new operable windows, new elevators and escalators, upgraded common corridors and restrooms, and more.

Newark will serve as the exclusive leasing agent for the 850,000-square-foot property.

“This is an iconic building with a rich history and character that has been upgraded to embrace its Art Deco past in a modern, forward-thinking fashion,” said Matthew Leon of Newmark. “Tenants will appreciate the efficient layouts and hospitality design focus in a storied property that is conveniently located and well-priced.” Gordon added, “These new suites represent the highest value proposition of any building in Midtown.”